Although based near DC, the members have rural, farm and coal miner family roots, from the mountains of West Virginia, Pennsylvania and Southern Virginia.
Supporters of Stroke Awareness.
Their recordings have had favorable reviews and international radio airplay.

Review: “We watched their fingers light up the strings on banjo, guitar, and bass as they harmonized their voices on a range of country, rock, folk, gospel, and traditional bluegrass melodies.”  Read More - King Street Bluegrass Lights Up Gloria’s Beth Miller-Herholtz 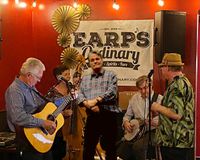 Free bluegrass show! Let’s heat up this February at our fav spot, Earp’s Ordinary! We can’t stay away! Reserving your table is advised! Zandra’s Taqueria is their temporary location while they put the finishing touches on their bigger place on Main Street. No cover charge, though it’s recommended that you Reserve your table at https://www.earpsordinary.com/